If history is a guide, the mushroom industry will continue expanding at rapid rate. The mushroom- and exotics market was worth $35.08 billion in 2016 and is expected to be worth $59.48 billion in 2021. This is an increase of nearly 70%.

The Asian Pacific, USA and Europe are the biggest producers of mushrooms worldwide. Latin America goes through an unprecedented boom by using mushrooms as an ingredient in various dishes. The Middle East and Africa are set to exhibit a decent growth because of the abundance of raw resources and favourable growing conditions.

The future of the global demand for mushrooms is looking bright, because there is an ongoing trend of people turning towards organic & healthy foods. Developed countries have incorporated mushrooms into their diets as a high-protein meat replacement. Mushrooms are a rich source of vitamins, minerals and antioxidants. The rise of mushroom consumption in China and India is primarily related to rising income and population.

The mushroom industry has turned to technology to meet the increased demand. Improvements in efficiency and working conditions has given the market a boost.

The canned and freezer mushroom markets rely heavily on mechanization to cut costs and work the scale of economies. Producers for the fresh market are also forced towards mechanization because of a shift in labour costs among other things. Mechanized systems and bulk handling of materials for preparation of substrate are used to increase the efficiency in order to work the scale of economies.

Mush Comb originates from a mushroom farm itself and wants to grow alongside mushroom growers by offering mechanization solutions such as Machinery, Climate, Supplies and Engineering. 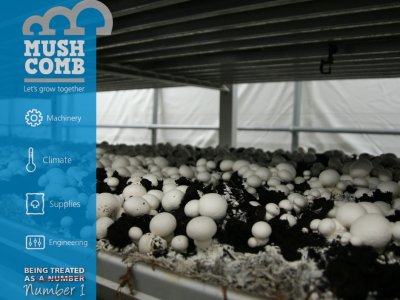