1 January 2021 marks the 25th anniversary of the Horst-based company Mush Comb! What better time to shine the spotlight on this successful family-owned business!

On New Year’s Day 1996, Jeu Holtermans started his own business - Mush Comb. In repairing and selling second-hand machines, he succeeded in identifying and filling a gap in the market for mushroom culture. In 2004, his 21-year-old son Bob joined the family business team, and in 2007 they decided to reinvent and refocus the business. Since then, the company has focused on producing new and innovative cutting-edge machines. The new business strategy demanded a major investment, but the benefits soon became apparent. The company’s revenues have quadrupled since 2007, and the family business has developed into a world leader in supplying innovative high-quality machines.

Thanks to its rapid growth, the company has had to move to larger quarters several times over the years. Demand for the high-quality machines made in Horst comes from all over the world. The quality and ease-of-use of the machines is highly valued by the rapidly expanding customer base, but that’s not all. The personal focus as well as the honest and straightforward approach taken by Mush Comb acts like a magnet on clients near and far. Clients feel like they are really being heard, as the company is always ready and willing to think things through with them. It’s all about customising the machine to the specific wishes of the client. ‘There’s a solution for every need’ is the company motto. And whether the client is based in Europe, Africa, America, Asia, or Australia, the service provided is always top-of-the-line. Full of enthusiasm and energy, the team members are always ready to assist clients day and night. Their business philosophy can be summed up simply as: The client is not just a number here; the client is always number 1!

All the company’s machines are completely developed and built in-house on the Nijverheidsstraat in Horst. And in recent years, the production line there has only been expanded further. The popular and user-friendly “picking lorry”, used for harvesting mushrooms, is just one example of their successful product range. This simple and completely customisable machine is being used with complete satisfaction by Dutch as well as foreign growers. The casing soil separator, introduced by Mush Comb in 2012, is another successful high-quality product. Its panted technology gives sustainable culture a shot in the arm by making it possible to reuse the casing soil. The Mush Comb head-filler, which has gone through several successive development stages, is another top product. The recent purchase by a leading Dutch grower only proves once again that it is highly regarded in the Netherlands as well.

Ready for the future

In addition to producing high-quality machines, Mush Comb has also devoted the last year to working on new projects, such as the development, production, and delivery of complete climate systems for growers. Such initiatives points to new opportunities, new challenges, and a new market. And in spite of the current corona crisis, the company is still continuing to expand its activities, as is made clear by its new building plans. In fact, production floor space was expanded by no less than 50% in 2020, and the company’s office space will actually be doubled in its 2021 anniversary year. Together with its clients, Mush Comb is facing the future with all the confidence in the world!

In celebrating the company’s 25th anniversary, not only will the client be number 1: Each and every person who has contributed to the success of Mush Com deserves such a place! 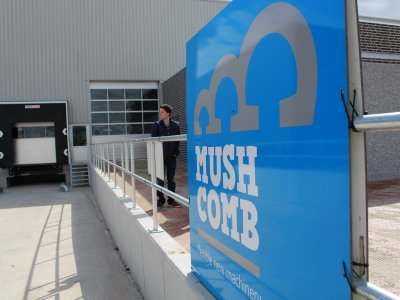